Providing Help and Hope
for the Homeless in Bartlesville, NE Oklahoma, and SE Kansas

Fast Facts
The Impact We Made Together Last Year

Cost Per Day to
Operate Lighthouse

We provide food, shelter, and clothing within a family atmosphere of love and peace, based on the teachings of our Lord Jesus Christ. Our goal is to provide the resources and training to help residents become self-sufficient citizens of the community.

The staff at the Lighthouse never gave up on me. I asked God to forgive me and for help in restoring my life. The anger left me. I still don’t have answers to all the questions, but I know a loving God. 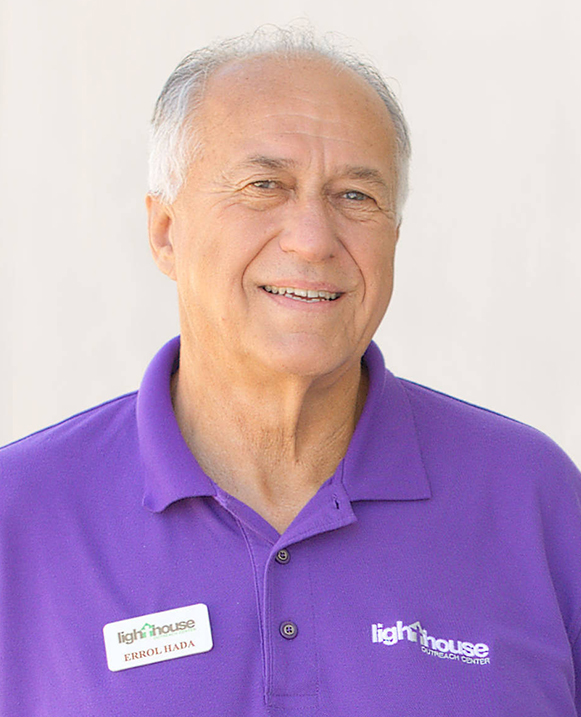 Errol Hada was born in Alva, OK. He graduated from Miltonvale Wesleyan College in Miltonvale, KS which is one of the colleges that merged to form Oklahoma Wesleyan University.  He received his Bachelors in Elementary Education from Northwestern Oklahoma State University in Alva, and a masters in Education Administration from Northeastern Oklahoma State University in Tahlequah. He had a career of 40 years in education, having taught in public and Christian schools in Cherokee, OK; Bartlesville, OK; Tyro, KS; Tulsa, OK; Austin, TX; and Pawhuska, OK. He is now retired from teaching and serves full time as director of the Lighthouse. He and his wife Sharon have three daughters and 12 grandchildren.

Errol has served on more than 35 short-term mission trips with Campus Crusade, Global Partners, and the missions department of the Wesleyan Church.  He and his wife are active in prison ministry with Kairos and Genesis One.  Mr. Hada first became involved in working with the homeless in Austin, TX through the South Austin Church of the Nazarene.  He moved to Bartlesville in 1991 right before the Lighthouse was established.  His church began to provide a meal once a month under his leadership, and he preached the message to the residents.  He has served on the Board for several years prior to becoming the director in the fall of 2013.  He is a member of Sooner Park Wesleyan Church where he serves on the board, mission committee, and teaches an adult Sunday School class.